Degas at the Opera, presented by the Orsay Museum 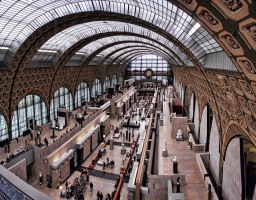 This is an exhibition not to be missed during your break in Paris at the Hotel BW Quartier Latin. The Orsay Museum takes you into the social whirl that was the Paris Opera in the late 19th century via the observant eye and expressive hand of Edgar Degas.

Degas at the Opera at the Orsay Museum; artistic exploration

From his youth in the 1860s until after 1900, the Paris Opera was a source of inspiration for Edgar Degas. He explored all facets of this world, from those open to the public such as the amphitheatre and the stage, to the backstage world of the dressing rooms and dance studio. This was the artist’s muse, celebrated in his drawings and paintings of dancers, singers and musicians. Even the audience and patrons in their immaculate attire served as his subjects. How better to study contrast and light, gesture and movement than in such a vibrant environment? The Orsay Museum presents prime examples of this amazing body of work by an artist who is regarded as one of the founders of Impressionism and examines the way observing Opera life helped to shape his style and technique.

A portrait of the Paris Opera in the 19th century

Through Degas and his work, a whole world is revealed. From the movements of dancers, moments of relaxation behind the scenes, and musicians playing in the orchestra pit, to the leading lights of society in the boxes and first rows of spectators, the artist’s paintings and engravings are a mine of information on the Paris Opera as it was in the 19th century. Edgar Degas also portrayed many musicians in the 1870s, such as the cellist Louis-Marie Pilet and the bassoonist Désiré Dihau.

To get to the Orsay Museum from the Best Western Quartier Latin, follow the Seine towards the Louvre. You can also take Metro line 7 to Place Monge station.

Following the Order of March 14, 2020 regarding various measures related to the fight against the spread of covid-19 virus, we inform you that the Hotel Best Western Quartier Latin Panthéon is forced to close until further notice.

We remain at your disposal for any information at the following email address: info@quartierlatinpantheon.com

The Hotel Best Western Quartier Latin Panthéon is doing its best to be able welcome you back soon in the best conditions during your next stay in Paris.

Take care or yourself and your loved ones.