The Paris Motor Show; The largest in the world 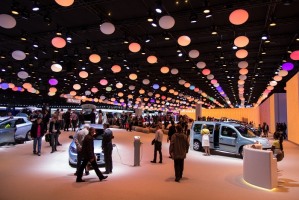 It’s time to make a note in your calendar, car enthusiasts everywhere, because the Paris Motor Show, the world’s largest automotive event, takes place from October 4th to 19th. The biggest brands, latest innovations, hottest new technologies, prototypes, concept cars, motorsports vehicles and world premiere launches; they’re all at Mondial de l’Automobile at the Porte de Versailles exhibition centre. The venue is easily accessible from the BW Hotel Quartier Latin Pantheon, where we also provide a tranquil setting in which you can relax following a busy day at the show.

The World’s First Motor Show is still the best

The Paris Motor Show was the first of its kind in the world. Begun in 1898 by Jules-Albert de Dion, a pioneer of the French automobile industry, it is today the leading automotive trade show. Taking place every other year, the event is noted for its number of new product launches, making it essential for anyone with an interest in automotive iinovations. Exciting, dynamic and often surprising, this show should not be missed.

New vehicles expected to premiere at the Mondial de l’Automobile include the Mazda MX-5, a new version of the ever-popular Vauxhall Corsa, the Volvo XC90, a redesigned Skoda Fabia, the Mercedes C63 AMG estate and a powerful sporting version of the Bentley Mulsanne sedan. Debuts from Alfa Romeo, Jaguar and Land Rover, amongst many others, are also expected, along with a new Renault slated for production.

Each year the show hosts an historically significant exhibition and this year is no different. Taking place in Pavilion 8 will be Automobiles and Fashion, dealing with two fields that share a great deal in common. A chronological timeline will demonstrate the synergistic relationship between these two subjects through the pre-War, post-War, Pop Art era, 70s and 80s. There will be around 40 cars on display to illustrate the time periods covered.

The cultural and events hub that is Paris always has something of interest to offer. If your personal tastes run to antiques and the art and crafts of yesteryear, then the Biennale des Antiquaires at the Grand Palais from September 11th to 21st will certainly be of interest. From all over the world leading dealers and experts gather to exhibit the highlights of their collections and the effect is stunning. However, if contemporary design is more your cup of tea, then Paris Design Week, from September 6th to 13th at various locations throughout the city, will certainly keep you abreast of what’s hot and what is just over the horizon.